In 1918 the Warwick China Works in Chadwick St, Longton was purchased allowing the business to manufacture bone china ware and fancy items in addition to its extensive domestic earthenware. John Wright Beswick died in May 1920 and John Beswick became the proprietor and driving force behind the expansion of the business. His brother Gilbert I Beswick appears to have played a lesser role in the business. John Beswick died in October 1934 after a prolonged illness at the age of 65.

From 1934 to 1938 the business was controlled by John Beswick’s executors, but in 1938 the business was incorporated as John Beswick Ltd with John Ewart Beswick and his two sisters Dorothy and Gladys Beswick as the Directors. In 1945 the adjoining premises of H. M. Willamson & Sons were acquired and in 1957 the factory of Thomas Lawrence was purchased to allow further expansion of production. From 1957 John Beswick Ltd traded as a listed public company. John Ewart Beswick had no heir and in June 1969 he sold the entire share capital to Doulton & Co. Ltd.

After its 1969 takeover, Doulton continued to produce the Beswick animal models and figurines under the Beswick name, although the range was reduced and only a few new models entered production. From early-1989 Doulton ceased using the Beswick trade name, although the Gold Street factory continuing to produce the same models with a Doulton backstamp. The Beswick mark was briefly resurrected for the centenary of the name 1994. Doulton ceased production of the ‘Beswick’ models and closed the Gold Street factory in 2002, the site being sold for development in the following year.

In 2004 Doulton put the Beswick ‘brand’ up for sale with an asking price of £1.5 million and, in mid-2005 it was sold to John Sinclair, owner of a chain of antique shops. The new owner announced plans to re-start production of prestige limited-edition Beswick collectors’ wares in Tunstall and to sell mass-market Beswick figures and ornamental wares manufactured in Malaysia by the giftware company Enesco. The company has continued to successfully market ‘Beswick’ products up to 2011.

The company’s mark was a simple printed ‘John Beswick, England’ or the familiar script ‘Beswick’ name.

From mid-2011 this web site replaces the printed Collecting Doulton & Beswick magazine edited by Barry Hill and Jocelyn Lukins. It is an independent and authoritative source of information for collectors of Royal Doulton and Beswick.

The site carries articles, diary dates, letters, small advertisements, auction reports and other Beswick and Doulton news. It is currently free, but may introduce a small subscription to access in-depth articles and archives.

A site run by UKI Ceramics promoting sales of Beswick wares produced since 2007 by John Sinclair, the current owner of the Beswick name.

These are web sites devoted to selling Beswick wares. 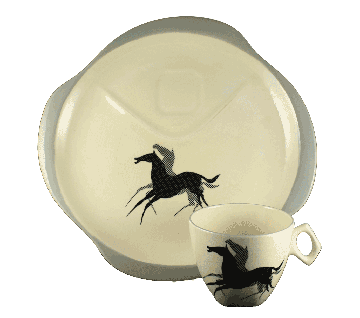