The firm acquired the Hadderidge Pottery, Burslem at about this time. Production continued through the Second World War, but at a much reduced level, and following the end of the war W. R. Midwinter was joined in the business by his son William Roy Midwinter.

Roy Midwinter assumed control of the business in the late 1950s (although his father was active in the business for a further decade) and under his management the business became one of the leading producers of domestic earthenware in the 1950s and 1960s. Midwinter acquired the neighbouring A. J. Wilkinson Ltd and Newport Pottery Co. Ltd in 1964. The purchase was to expand production due to the success of the ‘Fine’ shape tableware and continuing demand for the company’s ‘Fashion’ tableware. Despite the success of the ‘Fine’ shape, the firm encountered financial difficulties in the late 1960s and was taken-over by J. & G. Meakin Ltd in September 1968. The holding company for the combined group was Meakin & Midwinter (Holdings) Ltd, however the new Meakin-Midwinter business was itself was taken over by the Wedgwood Group in January 1970. W. R. Midwinter Ltd continued as a semi-autonomous unit within the Wedgwood Group until Wedgwood closed the business in 1987. Roy Midwinter left Wedgwood in 1981 and became associated, as a designer, with Federated Potteries Ltd. He died in 1990.

W. R. Midwinter Ltd was originally a manufacturer of Rockingham teapots, tea wares and toilet wares. During the 1920s and 1930s the firm became well known for its semi-porcelain dinnerware and tea and coffee ware marketed using the ‘Porcelon’ trade name. These wares were decorated in conservative style except for some art deco inspired abstract patterns applied on Midwinter’s traditional shapes. Nursery ware and fancy earthenware were also made. These pre-Second World War wares are of little interest to collectors.

Under the influence of Roy Midwinter the company led the revolution in tableware design in the United Kingdom in the 1950s, 1960s and 1970s. Drawing inspiration from the American designers Eva Zeisel and Russell Wright, Midwinter launched the contemporary Stylecraft range in 1953 and the even more radical Fashion shape in 1955. The latter, designed by Roy Midwinter and fellow director William Lunt is typical of the Midwinter style of the 1950s and early-1960s and is characterised by flowing lines and the integration of handles and other parts into the body of the ware. With its rimless plates and fluid, organic lines it is now regarded as an icon of 1950s design. The memorable patterns produced by Midwinter’s in-house designer Jessie Tate or commissioned from artists such as Hugh Casson, who’s drawings of French scenes under the name ‘Riviera’ are now so highly sought, contributed materially to the firms success.

In 1960 Roy Midwinter commissioned David Queensbury (later Marquis of Queensbury), to design the ‘Fine’ shape launched in 1962. This was a radical departure from the flowing, organic shapes popular in the 1950, but its spare cylindrical shape again caught the public mood. The Fine shape was re-modelled in 1966 and launched as the ‘MQ1’ and a second Queensbury design the ‘MQ2’ shape was launched in the same year.

Roy Midwinter was also instrumental in the development of the ‘Stonehenge’ range released in 1972. With its speckled glaze and bold lines it too caught the mood of the times and the strongly coloured ‘Sun’, ‘Moon’ and ‘Earth’ patterns designed by Eve Midwinter were enormously popular until their withdrawal from the market in the early 1980s.

W. R. Midwinter Ltd used the trade name ‘Porcelon’ in the 1930s, possibly until c.1953. Post-war marks include the company name and many cases the shape name -‘Stylecraft’, ‘Fashion’, ‘Fine’, ‘Stonehenge’ etc. The name of the artist responsible for the pattern is also often included.

Holding company formed to facilitate the merger of J. &. G. Meakin Ltd and W. R. Midwinter Ltd. The merger was announced in September 1968 although the intention was for both businesses to continue to trade under their own names and pursue their own individual marketing and sales policies. Post-merger, the combined group was to be known by the name British Tableware Ltd, although it is uncertain whether this name was ever actually used. Although termed a 'merger', J. & G. Meakin Ltd were the dominant influence and the Chairman and Deputy Chairman of J. & G. Meakin (J. W. E. Grundy and A. Derek Jones) assumed those positions on the holding company Board. Meakin & Midwinter (Holdings) Ltd and thus the assets of both businesses and their subsidiaries were acquired by Wedgwood from January 1970 through an offer for the whole share capital of J. & G. Meakin Ltd.

A wesite devoted to British retro ceramics and glass from the 1950s to the 1980s. Includes notes and images of many Midwinter wares.

Earthenware manufacturer at the Albion Pottery, Navigation Rd, Burslem, and, later, also at the Hadderidge Pottery, Burslem. W. R. Midwinter was founded by William Robinson Midwinter at Bournes Bank, Burslem in about 1910. The business expanded rapidly moving to the Albion Works in Navigation Rd, Burslem in 1914. William Midwinter served in the Royal Navy during the First World War and care of the business was left in the hands of his wife. Further expansion followed in the 1920s and 1930s and in 1932 the business was incorporated as W. R. Midwinter Ltd, with William Midwinter and A. T. Godwin as the Directors.

A Midwinter Fashion shape coffee pot (1954) with ‘Canne’, a sketch from France by Hugh Casson. 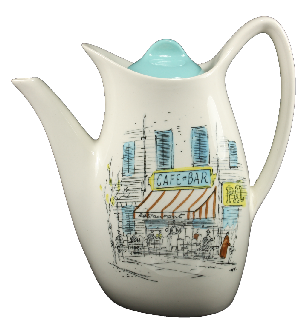